Frightened by The Rhetoric 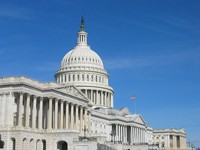 With the House of Representatives passing the Pork, I mean Carbon Tax Bill (aka Waxman-Markey) this past Friday with all the kow-towing to all manner of special interests. Electrical utilities are supposed to get 30% of the carbon certificates for free despite the fact that the  auction of these were supposed to generate big tax income like the wireless spectrum auctions. Farmers get in on the act too with special goodies for them.

And now, lobbyists are writing blog posts like Soviet futurists – all hail the great New Economy that our ninth five year plan will provide for the safety and security American workers. Yuck!

Mindy Lubber writes on greenbiz.com the scariest rhetoric about what the new new proposes to do in terms about a New Economy. Sorry to let you know, but the flaw in the plan is that this is a PLAN! The economy is plenty efficient without having to force people and companies to introduce new methods for generating electricity. Of course, everything in our economy uses energy, usually with a price and conversion (to value) efficiency that is optimal for billions of individual decisions by millions of citizens. Change that efficiency and the cost of innovation, the value of new products and services will be smaller. The prices will be higher and the total wealth created by citizens and our economy, smaller.

This bill is a plan to drive our economy right off a cliff.

Let’s artificially inflate the cost of doing business, living and creating value so we can MAYBE avoid a warming planet or is it a cooling planet? Surprise, I’d know this was a joke if the writer wasn’t so earnest!

Mindy scares us all with the idea that doing nothing will cost a great deal in terms of the costs of climate change – this is bunk. Climate change is only natural. It’s a part of life.

This is so much communism about directed economic planning – something that only the arrogant economists and lawmakers in a Democrat-controlled Congress could dream up. Pinch me. I need to wake up from this nightmare soon — really soon.