I spent an hour on the phone with Andy Mills, SVP Marketing and Development, Ciprico, the other day to discuss their latest announcement of a software OEM deal with H3C Technologies, the Chinese subsidiary of 3Com.

H3C Technologies has an interesting history: formed from a joint venture between 3Com and the enterprise division of Huawei in 2003 and by early 2007, a wholly owned subsidiary of 3Com.

3Com's 4Q07 results showed that H3C delivered 30% more revenues than 3Com proper, ($176M vs $135M) highlighting the very strong traction that H3C has earned in the China market, one of the largest and fastest growing IT markets around.

Ciprico of Plymouth MN was founded in 1978 and designs and markets high performance storage software, appliances and solutions to the TV and film industries, the US government and more recently the SMB (50-250 employees) segment of the enterprise IT market. In 2005, Ciprico acquired the assets of Huge Systems, a video/broadcasting storage leader, and in June 2006, the company acquired the Broadcom RAIDCoreTM product line.

With the arrival of a new management team in December 2006 with experience in enterprise storage systems, components and silicon (IBM, Hitachi, Broadcom, TDK, Rockwell) the company is in the throes of rebuilding itself. It recently retooled the engineering team with a greater weight on software skills.

The first fruits of this new strategy are reflected in this OEM deal with H3C. The deal, baking for several months, resulted in the general availability of the RAIDCore software in the small and medium elements of the H3C IP Storage product line, as shown in the figure below. 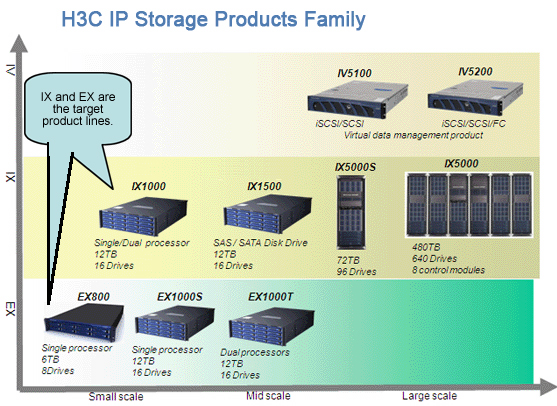 This deal comes on the heal of H3C's announcement last month of it's 51.9% share of the IP storage market (according to IDC) where the market had grown 130% in 2006.

Specifically, the deal allows H3C to deploy Ciprico software technology in its product line eliminating the cost of a separate processor on the disk controller card. The innovation significantly reduces the hardware cost of the controller card, and ultimately the entire storage solution. Reducing cost this way speaks volumes about the maturity of H3C's product management and points to their continuing leadership in this market.

Here's a case study with the Social Security Surveillance System of the kind of deployments H3C has under their belt: 189 units deployed in this network. 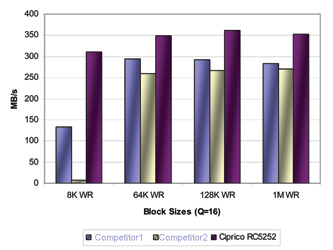 In testing performed by Ciprico, you can clearly see how a typical storage appliance using the software implementation of the RAIDCore technology might fare considerably better in the demanding RAID5 configuration.

Andy's point: that a 2G dual core processor working parttime delivers better performance than a fulltime 800M processor 'RAID on a chip', and does so for a fraction of the cost.

Overall, this deal positions Ciprico strongly in one of the fastest growing markets on the planet. Financial terms of the deal were not discussed, so we can't comment on the revenue impacts. A few things to note – even though H3C is a major enterprise IT vendor in China (neck and neck with Cisco in most product categories they compete in), the total market in terms of $ is much smaller, because they pay lower prices than we do here in USA. Furthermore, software OEM, such as component software in hardware appliances don't attract a big price tag, especially in China.

Nevertheless, this announcement is more about credibility of the technology and commitment of the management team than it is about big revenue strides – but that's ok. A few more deals like this, and the company will be back on its feet, with the revenue curve pointing in the right direction sooner than later.