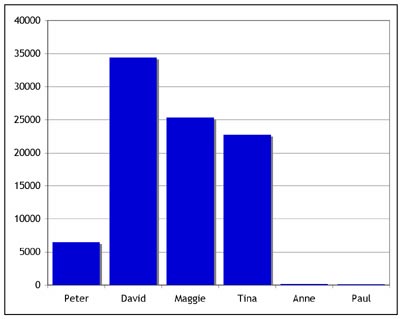 I surprised myself with a quick game of www.aimfight.com. www.aimfight.com is a neat tool for showing exactly how powerful instant messaging is in America. The idea of the game is to test one AIM user versus another. The score? The sum of how many of user A's buddies, buddies buddies are online, versus the sum of three degree's of user B's.

I learned something really important the other day. IM is a vital communications tool for young people. So, here's the score of a recent AIM Fight I did with my family:

So, my teenage kids have IM networks on average three times bigger than my biggest network. My network varies by time of day, which of course, stands to reason, since I use it for business (and my contacts probably use it for business too). It is largest during the day, and shrinks to about half that size at night, which is where my kids' network is at their largest.

This little game made me think about the prospects for an AIM-only handheld device. I've seen David, the king of the family AIMFight spend lots of time doing IM with his mobile phone. In fact, he spends more time doing SMS than phone calls. Would teens want an inexpensive SMS or IM-only portable device?