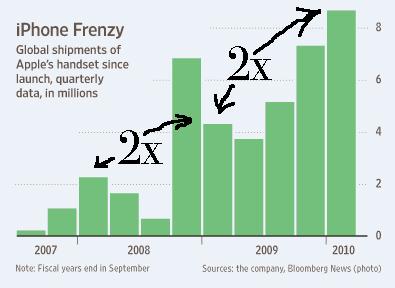 The Wall Street Journal (subscription required) reported this graph (with my edits) from Bloomberg and Apple showing how the product continues to win fans and accelerate adoption. The big spike in the 4Q of 2008 was the release of OS 3.0 and the Apple 3GS. Note that the years shown are not calendar quarters since Apple’s fiscal year is October – September.

Next revs of the iPhone have many directions to go. It could offer multi-threading services, more network access, CDMA support for VerizonWireless, Sprint, China, Korea, maybe even a 4G or LTE device.

With the upcoming announcement of the Apple tablet computer (scheduled for Wednesday, January 27, 2010) it will be interesting to see how the new device affects the mobile services market. Could laptops really become passé?