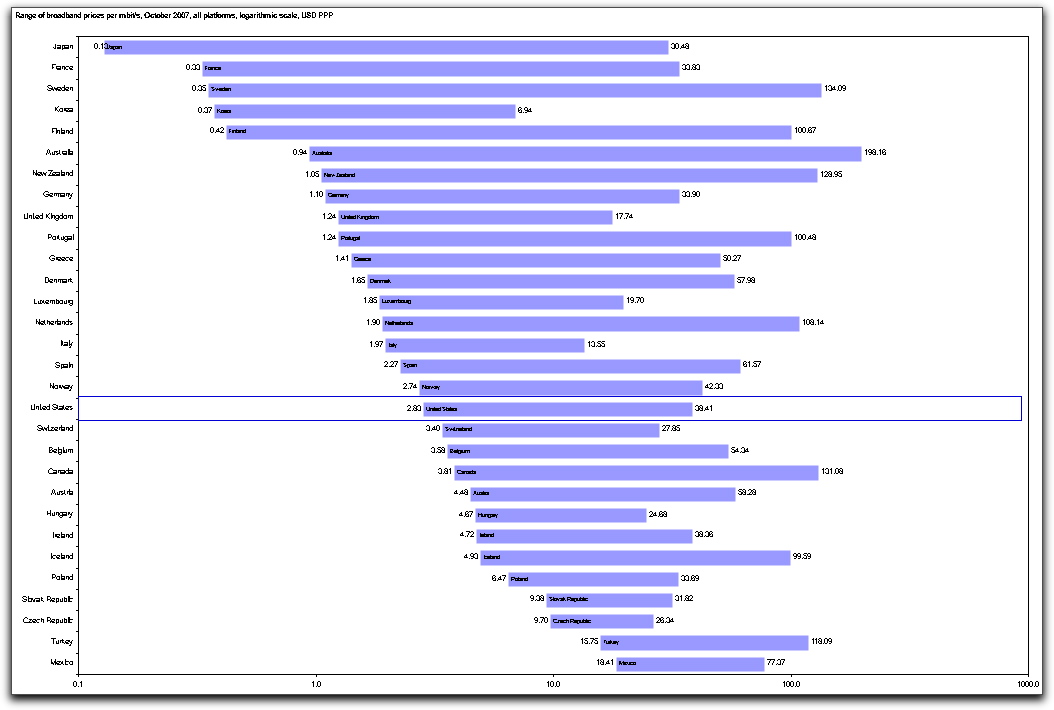 The Bandwidth Forum reported today that there are now 400 million broadband users around the world.

The OECD says that the US is the largest broadband market in the world with some 75 million subscribers in 2007. One of the interesting stories is the price of broadband per Mbit/sec in US$ as shown in this graphic from the OECD. This shows that the US is not the lowest priced broadband service despite the size of the market. Note that Japan, France and Sweden are 1,2 and 3 in lowest price (at the top of the graph) which should have an effect on their service penetration.

But, that's not the case as shown in this figure from the OECD.

In this graphic, the highest penetrations per 100 inhabitants is Denmark, The Netherlands and Norway. The 1, 2 and 3 countries above are in fact, 17, 13 and 6th. In fact, Japan has fewer broadband subs/100 inhabitants than the USA or Canada, yet Japan had the lowest price regime (top graphic).

Maybe that's a factor of the competitiveness of the Japanese local loop and not so much the demand for the service.

The US in both graphics are shown by the blue box, having neither the cheapest service nor the highest penetration. Interestingly, the US did have the highest quantity of cable broadband users after Canada.

It would be interesting to see how broadband penetration compares to cable penetration. I suspect we'll find that cable penetration is very high in Canada and the US as compared to other OECD countries, which when taken together might suggest that for these two countries, Internet is very much a mass market entertainment platform (why else would you buy it from the cable company?), while in Turkey or Poland, it might be closer to a luxury or work necessity.