So where is Polycom focusing these days?

At Interop, there were several areas of interest to me:

As well, the Video Border Proxy 4350 offers 3 Mbps throughput can support a physical T1 interface, and retails for $1,999.

Polycom's Lost Packet Recovery patent has been applied to the HPX line and is now expanded to the desktop portfolio of HD video implementations. The core technology is predicting the contents of missing packets which is a significant problem in the 100s of kbps speed range. For most HD implementations this is not such a big deal. Improving the quality of experience is a worthy goal.

I hope Polycom will focus on blurring the boundaries between telepresence and HD video conferencing.

Then, Kevin Young took me over to meet with Chalan Aras, VP Voice Marketing who shared several cool products and features.

In the spirit of sampling the product, Polycom had a 3-person phone booth in the booth and used it to isolate the noisy show floor from the experience of listening to the auto attendant of the world's first HD voice audio conferencing service via www.zipdx.com . This Polycom codec, sampling at 22.1 kHz (which is CD-quality) is likely to be ratified as an ITU standard in the G series. It is a remarkable improvement in the audio communications experience and one that is a long time coming. IP phones had the ability to use the network bandwidth (what's a few kbps between friends?) from the beginning, but lacked standard codecs, inexpensive processors and HD voice capable gateways.

I believe this will provide the BIG reason for gateway-less intra-company and finally inter-company communications paths. Let Metcalfe's Law rule! 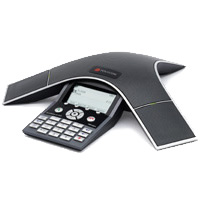 The 'Boomerang' lives! In the latest update to the venerable conference room phone, the IP7000 gets a healthy dose of P2P networking controls, a bigger user control screen and four soft keys at the bottom of the display. Now, the formerly cryptic UI will be more verbose, and hopefully a lot clearer for important context-sensitive services like – redial, edit the number (it was a dyslexic call with transposed digits) and multi-way ad hoc conferencing.

Here's an analyst's rendition of the four soft key options right at the bottom of the display. New Call is pretty straightforward. Directory refers to the IP PBX directory service, and can be LDAP integrated (as can the XML browser applications now supported on the regular Polycom IP phones) with centralized directory services. The My Statistics is the log of your calls covering numbers, names, dates, times, duration and so on. Buddies were most interesting. This is a presence reporting (subscription function), so you can see that the person you want to reach is on the phone. In future releases it could be integrated with Microsoft OCS 2007, but would probably require customer request to make it an R&D priority.

Polycom is also implementing a strategy to retire the little (were they ever really useful?) microphone pods that frequently extend the boomerang's microphone reach. Now, a number of IP7000s can be daisy chained to cover larger areas.

5. XML Applications were discussed at my VoiceCon briefing and were demonstrated here at Interop. Now Cisco's XML-addressable IP phones are not alone.

I bet some of the third party unified communications applications developers that have been focused on Cisco IP phones (because that's where the functionality was) will begin to look at porting their applications or tuning their applications to work with Polycom phones. This would expand the array of customer choices and grow the market for the use of phone applications in poorly addressed vertical markets like dentist offices and pizza chain outlets. I'd think that Polycom plans to develop this market aggressively.